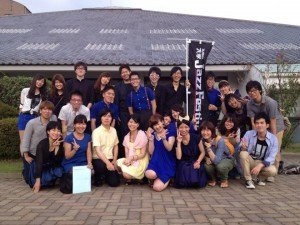 Modern Music Society, often called as MMS, is a jazz big band ensemble consisting of five saxophones, four trumpets, four trombones and the rhythm section; piano, guitar, bass and drums. MMS performs wide range of music from classic jazz piece to modern jazz works, including Count Basie, Woody Herman, Thad Jones, Buddy Rich, Phil Woods, John La Barbera and more. Although the band is a non-audition band, which can be a rare case for Japanese college big bands, and do not have a director, all members are highly dedicated and passionate with their practice to perform at high level and challenges to interpret the music with their own unique rhythmic ideas.

The rehearsal schedule is very intense considering being extracurricular and the class schedules. The band rehearses 3 times a week, if not more, and sectionals are held on the side as well. Additionally the band performs in a format called combo, which is a small jazz chamber groups focusing mainly on soloing over standard jazz repertoire. Although the annual schedule can keep the students occupied, such schedule includes interuniversity concerts, band camps in spring and summer, national contest in August, school festival concert, etc., the band is highly energetic and enthusiastic with all of the performances.

MMS has entered Yamano Big Band Jazz Contest, one of the most renowned national contests for the college big bands, and has received numerous outstanding awards and ratings. In the Yamano Big Band Jazz contest, the bands placing in the top 10 are awarded and in 2013, MMS, out of 55 bands including the qualification round, has achieved to place 7th place in the contest. Not only that, MMS has also been awarded as the best rank up band, awarded to the band placing higher than the previous year with the most rank up.

Throughout the history, MMS has traveled and toured to United States four times in the past and has recorded CD’s in Los Angeles with legendary jazz artists; such artist included Chuck Findley, Wayne Bergeron, Gary Foster, and Bill Reichenbach. On this upcoming tour, the band will travel to Los Angeles, Sacramento, San Francisco, and Honolulu.

Modern Music Society is a college jazz big band at International Christian University, also known as ICU, based in Tokyo, Japan. ICU, founded in 1956, was established as the first liberal arts college in Japan offering fully bilingual education in Japanese and English.