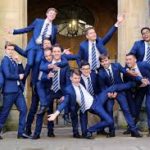 Out of the Blue is Oxford’s premier all-male a cappella group, and the top a cappella group in the UK by number of championships. You may have seen them from their viral video hits, which have received over 15 million views on YouTube! Comprising students from Oxford University and Oxford Brookes University, Out of the Blue has performed on the West End and on Broadway, reached the semifinals of Britain’s Got Talent, and toured around the world to places including Switzerland, Canada, India, Hong Kong, and Japan.

The will be performing at the Rio Performing Arts Center on March 19, 2018. Tickets are available for $10.

Take a peak at their 2017 Charity Video