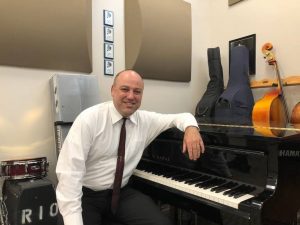 When Josh Murray conducts the Rio Americano High School AM Jazz Ensemble, he doesn’t use a baton.

After counting off the tune with a brisk “1, 2, 1, 2, 3…,” Murray exits center stage and leaves the students under the spotlight.

“My goal is to get out of the way and not draw any attention to myself,” he said.

Murray recently completed his 21st year as director of the Rio Americano jazz ensemble – a year in which the band won Best High School Jazz Band and best small jazz combo awards from DownBeat Magazine, the print authority on jazz since the 1930s.

“Just to be recognized in our magazine is very prestigious,” said Sue Mahal, DownBeat’s assistant publisher. “It’s just so exciting for these kids, and it helps them get excited about jazz.”

The Rio Americano program is one of the standouts in a Sacramento region that’s a youth jazz powerhouse. Other local schools that won DownBeat awards this year include Folsom High School, which tied with Rio Americano in the best high school ensemble category and won for outstanding high school performance. Other winners were University of the Pacific, Sacramento State University and American River College.

The Rio Americano jazz program is 35 years old, and hosts 70 students. In April, those students traveled to New York City to attend the Essentially Ellington Festival, leaving with recognitions including outstanding brass section and soloists. In September, the group will perform at the prestigious Monterey Jazz Festival, and play alongside legendary saxophonist Bob Mintzer in October.

Before arriving to teach at Rio in 1998, Murray had what he described as a “long strange trip” to where he is now.

The music educator grew up in New York City with his mother, an artist and poet later turned clinical psychologist. At the age of 11, he began saxophone lessons with Dan Wilensky, who has played with David Bowie, Madonna and Ray Charles.

Murray immersed himself in jazz at a young age, listening to John Coltrane and Charlie Parker. Eventually, Murray wanted to be just like Wilensky, his private teacher.

After completing one semester at the New School’s jazz program, Murray moved to Sacramento at age 18 to live with his father.

“I just needed to get away from New York. It’s a very tough place to live,” Murray said. “I was looking for the slower pace of life. I didn’t need to be right in the thick of it at 2 a.m. playing jazz gigs.”

In Sacramento, Murray landed gig after gig, and enrolled at UC Davis, where he studied jazz history. His studies culminated in a thesis that used a psychological lens to examine the life of Charlie Parker.

Shortly after graduating in 1996, Murray got his teaching position at Rio Americano.

“As much as I love jazz, teaching is what I’m supposed to do,” Murray said. “I love inspiring kids. I love them coming in with no real passion about it and helping them find their passion for music.”

“They have a lot of freedom in what they do, but he has outcomes he’s looking for, and he pushes them to get to those outcomes,” Ginter said. “He does a great job supporting them along the way.”

According to Murray, the key to motivating students is creating “an atmosphere in which kids want to be the best they can be.”

Murray essentially treats his student musicians as professionals, setting standards of efficiency and musicianship that students must strive to follow if they wish to remain in the ensemble. Every morning at 7 a.m., the students are ready to rehearse in the band room, a short walk from the high school’s administrative building.

“We’re given a lot of responsibility and there’s a lot expected of us, but everyone rises to the occasion,” said sophomore Catherine Treadwell, a saxophonist in Murray’s jazz ensemble.

For Murray, jazz isn’t just about the rhythms, improvisation, solos and baselines. “He knows what the big picture is,” said Maxwell Kiesner, Rio Americano’s other jazz director. Jazz is a phenomenon, the most significant American cultural contribution to the rest of the world, according to Murray.

The rich historical bed on which the music rests is just as important in Murray’s classroom as learning the music.

“The students need to understand, recognize, and respect the African American roots of this music,” he said. “We spend a lot of time talking about the history of the music, the history of civil rights and the history of racism in this country.”

According to Kiesner, Murray engages in “Theory Thursdays” or “History Fridays” with his students. Students become much more invested in the music after learning about its historical roots.

Jazz, according to Murray, can also shape the students’ awareness of social and gender norms.

Murray hopes to transform his classroom into a safe space for critical, often difficult conversations about social issues. One of his main goals for the last decade has been getting more female students involved in his program.

Ten years ago, the jazz program was approximately three-quarters male. Today, the ratio is closer to two-thirds. One day, Murray hopes for fifty-fifty.

Sexism has long cast a shadow over the jazz world, Murray said, noting that many jazz instruments, such as the trumpet, drums, bass and saxophone, are viewed by some as “masculine” in nature, a characterization that still discourages female jazz musicians today. The world-famous Jazz at Lincoln Center Orchestra, arguably one of the world’s most prestigious jazz ensembles, led by Wynton Marsalis, features 15 men and no women. Although blind audition policies were adopted in 2016, no changes have yet been made to the composition of the band.

Murray holds an optimistic vision of the future. To foster an inviting atmosphere for the female students in his ensemble, Murray invites prominent female musicians such as drummer Allison Miller to visit with the students. With each concert lineup, Murray consciously includes works by female composers.

“I like to engage in very open and frank discussions about it in class,” Murray said.

Murray emphasized that many students have few other chances to discuss gender and race in other contexts.

“So we’re gonna have them in here,” he said. “We teach them how to be respectful when talking about those things and not be afraid to speak out.”

Beyond fostering a deep understanding of jazz, with its complex historical and societal context, Murray prepares his students for successful musical careers, accoriding to vice principal Robert Kerr. “He always has been helping students open doors through music,” Kerr said.

Five recent graduates of Murray’s ensemble are heading to music schools, including Berklee College of Music, UCLA, the University of North Texas jazz program and the University of the Pacific. Four earned full scholarships.

Kerr’s son, Ben Kerr, was a member of Murray’s jazz ensemble when he was in high school. Now a junior at Cal Poly San Luis Obispo, Ben Kerr is an aspiring jazz musician and music major.

Murray emphasizes that teaching is a reciprocal act, and that his students inspire him every day.

“Society changes, and it has really changed through the last few years, and I get to watch that firsthand through my kids,” he said. “And that makes me question, personally and professionally, myself and my beliefs. It makes me question myself in a good way.”